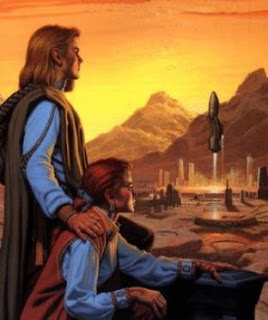 The end of all things always starts at the beginning, for without a beginning there can be no end...
Zander stood by the huge curved window of the observation deck.  The stars crowded the view like lights of a city in the darkness.  It had been two years since their voyage had begun on the surface of Lonii, the third planet of Sadira (Epsilon Eridani).  It was to be the beginning of a new life for many on board, as the overpopulation laws on both Lonii and its moon Moncantor had left many to suffer the outcome of non-reproduction status.  People left to grow old and childless, no one to care for them in old age and a system all too willing to allow the extinction of family lines, if you were not among the elite.
The Edel was one of five ships built to find and colonize any planet that could sustain Lonian life.  Zander studied his whole twenty-eight years for nothing more than a chance to leave Lonii and have a family of his own.  He made sure to study anything that could guaranty his acceptance as a colonist, Xenobotany, Plasma ion drive engineering and weaving, were a few of his specialties.  Today would bring all these things to circle, he and Jovie would be paired and their sterilization reversed.  It was something he had been looking forward to since the day he met Jovie in Xenobotany class five years ago.  They would be among the first allowed to have children onboard the ship.  The journey would take more than a life time to complete, so it would be necessary to procreate and teach the next generation.
The door to the observation deck opened, Jovie stood there smiling at Zander deep in thought and he turned around grinning back at her.  “The Captain is ready to sign our paperwork.”  She sighed, for although it was the beginning for them it would also start the clock to the end.  They would be given two years to have children together and after that they must both move on to others. It was the only way to broaden the genetic pool.