Bonnybridge, Scotland, part of the Falkirk Triangle, is considered the UFO capital of world, averaging about 300 sightings a year.  With a track record like that, it kind of takes the wind out of Roswell’s sail.  I found the activity in Bonnybridge a very interesting prospect as a likely location for an alien search party.  The fact that Bonnybridge is in the path of two major airports is a great cover for the Aliens, as most people tend to dismiss all sightings as no more than aircraft lights.


When I was researching a place in Europe with lots of activity this place was immediately on my radar.  Mostly because the activity is all recent, up until 1992 there was no UFO activity to be heard of, it wasn’t until a newspaper article publicizing the sighting of unexplained lights, that the phenomenon took root.  Some say it’s just the beginning to something big, but most just think the whole ordeal is ludicrous and the product of an over active imaginations.
I personally am on the fence with this place concerning its authenticity, but it fits into my next story nicely, as the main search area here on earth.   What is your take on the sightings at Bonnybridge?  Should we hold our breath for something big to come or is fiction way more interesting than fact? 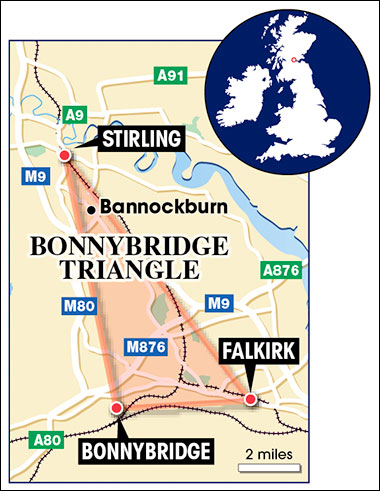 I found this website to have a vast amount of information on UFOs  http://www.educatinghumanity.com/2011/06/ufo-ufo-hotspot-bonnybridge-scotland.html
The news report from 2008 was also an interesting read...mostly because they take things so seriously. http://www.thesun.co.uk/sol/homepage/news/article1323017.ece
This one left me on the floor laughing at the comments
http://ufos.about.com/b/2009/01/14/ufos-near-bonnybridge-scotland.htm
And where would we be without Bonnybridge on Facebook http://www.facebook.com/pages/Bonnybridge-The-UFO-Capital-Of-The-World/142619729117207
C.G. Powell
Author of Spell Checked: Book One of The No Uncertain Logic Series
Follow me!
Facebook | Website | Twitter | Goodreads
Buy my book
Amazon | Barns & Noble | Smashwords
Posted by C.G. Powell at 5:53 AM