I have been doing a lot of research for my next book.  I found it interesting how most historical accounts of the Trojan War, omit what happened to Helen in the end, also her birth is a bit murky.  There seems to be much controversy not only about who was her father, Zeus king of the gods or Tyndareus her mortal father.  But, her mother is also in question.  Is she the daughter of Zeus and Leda – wife of Tyndareus or is she sired by Tyndareus?  It is also believed that she is daughter of Nemesis- Goddess of Retribution and Zeus.  Either way, one thing is known for sure, she was the most beautiful woman on earth and kings and gods alike desired her.
One of the things I found disappointing was that most depictions of Helen show her as a blond, unlike the populous of the area, which is depicted in pottery and wall murals of the time, as being dark haired.
For the purposes of my book Helen is a raven headed beauty and the mortal daughter of Leda and Tyndareus, with Zeus being more of a godfather type.  She is sadly the pawn of the gods and finds true love in the form of a half god named Paris.  The two are lovers for the next 3500 years due to the trickery of Aphrodite. 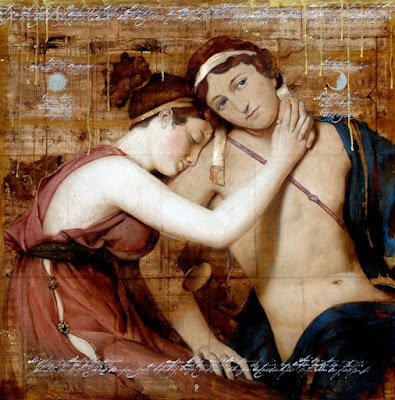 I love this depiction of Helen and Paris for its historical accuracy and simplicity.
One of the better sites for info:
Wikipedia
Posted by C.G. Powell at 3:26 PM