Off the coast of Ireland is a mysterious island that has appeared and disappeared at will.  Legend has it that the island, cloaked in mist, was once home to Celtic priest and the High King of the World.  But for fictions sake I like to think of it as the home of an alien race capable of manipulating energy.  They were also the keepers of knowledge, and the ones who taught pyramid building across the world. Although it is thought that the island sank, there is always the possibility that they just packed up and left, that the island was not an island at all, but a very large spaceship, as depicted on the TV show Stargate Atlantis.

Some of the facts that lend credence to Hy-Brasil being the missing city of Atlantis is its location beyond the Pillars of Hercules (Gibraltar), as mentioned by Plato.  But if you think about it, there is an entire world of sunken islands outside of the Mediterranean.  One of the most distinctive geographical features of Hy-Brasil is appearing on maps as a perfect circle, with concentric rings made of canals surrounding it.  The circular perimeter of the island was confirmed by both Saints Barrind and Brendan, who separately walked the shore to determine where the island ended, but never found it. Most likely, they were walking in circles. 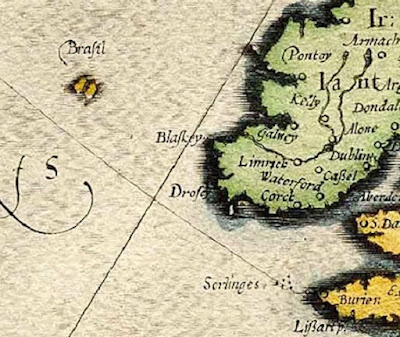 In 2010 Hy-Brasil was once again brought into light by the TV show on the History Channel program ‘Ancient Aliens’.  In 1980 Sgt Jim Penniston was stationed at Brentwaters military base. During the UFO incident in Rendlesham Forest, he claims that he touched a UFO and telepathically received a message in the form of binary code, which he wrote down in a small note book shortly after the incident, telling no one about it for three decades. This binary was said to have been decoded by Internet programmer Nick Ciske.
Below the decoded message followed the navigational co-ordinates of an area off the west of Ireland which correlates to the site of Hy-Brasil.
The decoded message read:
Exploration of Humanity Continuous For Planetary Advance
52° 09′ 42.532″ N
13° 13′ 12.69″ W


So, did / does Hy-Brasil actually exist?  Honestly I am excited to write fiction about this subject “The Words of an Immortal” is the third short story on the short story page of this blog.  It can be taken in so many different directions, and who doesn’t love a good mysterious mist shrouded island.  The only thing missing is strange lights and a four hour time lapse.
Here are some links I found fascinating on the subject of Hy-Brasil.
Strange News Daily Blog
Historic Mysteries
Please leave a comment.  What is your take on Hy-Brasil?
Posted by C.G. Powell at 3:37 PM