Cleopatra – Death by Asp or Ass?

From the beginning Cleopatra had a bit of an ego.  Unlike many of her predecessors who refuse to speak Egyptian, Cleopatra not only learned to speak Egyptian, she represented herself as the reincarnation of the Egyptian goddess Isis.  First she ruled jointly with her father as coregent, then later her brothers whom she married....I know this was an Egyptian custom at the time, but it still grosses me out!  Ironically, none of them lived very long under her rule. 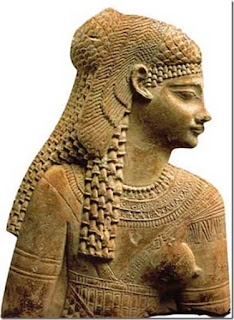 Her father Ptolemy XII was already considered a bit of a looser and was described as a weak, self-indulgent man, a drunkard, and a music lover (this was not a good thing in the first century BC).  He lost his reign and was exiled to Rome from 58-55 BC and upon his return to Egypt; he promptly had his successor during his exile, his eldest daughter Berenice executed, and ruled for four years with Cleopatra before his death.
In 51 BC Ptolemy XIII, her younger brother, was made co-ruler and by 48 BC, at the urging of his regent Pothinus he attempted to depose of Cleopatra fearing she had become too powerful.  This did not go well for Ptolemy when Pothinus murdered the wrong person and pissed of Julius Caesar who had now become the lover of Cleopatra.  In the end Ptolemy XIII, Pothinus and Cleopatra’s sister Arsinoe IV all would end up dead and Cleopatra would rule unchallenged.  At the death of his older brother in 47 BC, Ptolemy XIV was made co-ruler with his sister Cleopatra, he only ruled in name until 44 BC, when it assumed he was killed by poison to make room for Cleopatra’s son with Caesar, Ptolemy XV Caesarion. 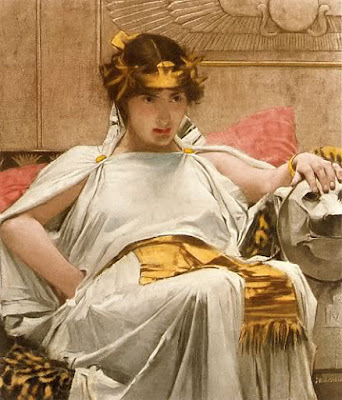 Upon Caesar’s death in 44 BC Cleopatra allied herself with Mark Antony in opposition to Caesar’s legal heir and nephew, Octavianus (later known as Augustus).  She and Antony had three children, twins Cleopatra Selene II and Alexander Helios, and Ptolemy Philadelphus.   After his defeat at Actium to Octavian’s forces in 31 BC, Anthony committed suicide.
For as much as Cleopatra had done to secure the continuation of her reign, I find her death by Asp to be a farfetched tale.  She was not one to go down without a fight, and I have a hard time believing that this feisty, mother of four, would have abandon her children to the hands of the enemy without a fight.  It is more likely she was killed at the request of Octavianus.
What are your thoughts, suicide or murder?  Was Cleopatra responsible for the deaths of her brothers and sister in her rise for power?  I would love to hear what you think, so please leave a comment.
Posted by C.G. Powell at 11:23 AM