For a short time begining Jan 4 2012 Slow Boat to Purgatory is free on Amazon.
So first off I would like to thank Christine for allowing me to advertise-I mean guest post-on her site. Before I get into the meat of the post I’d like to share a message from today’s sponsor, The Idiots Guide To Killing Demons, Hell-Hounds and Fallen Angels. That’s right, it is possible for a mere mortal to whack a veritable pantheon of otherworldly beings as long as you follow this simple manual and you have friends with certain skills that take seven hundred years to develop and fine tune. For a mere $9.99 on Amazon.com you too can learn the secrets of world class demon killers like Gaspar de Rouse, Alex Donovan and Dominicus Bureau from the book Slow Boat to Purgatory.
Of course you could just order Slow Boat to Purgatory from Amazon.com for $2.99 and get all the same information and a fun exciting tale that is garnering some nice reviews. All proceeds from the sale of both Slow Boat to Purgatory and The Idiots Guide to Killing Demons, Hell-Hounds and Fallen Angels, will be donated, by a not so circuitous route from Vernon Baker’s hands, to Pottery Barn for Kids, Gymboree and anything starting with Fisher and ending with Price.
Okay with that out of the way I present The Boat Man and Slow Boat to Purgatory...
Dante Alighieri
Charon, the boatman - you really don't want to meet him.
The first time I saw Gustave Dore's 1860's illustration of Charon, which is part of his collection of Dante's Inferno illustrations, I was hooked. Before it was the book cover and title inspiration for Slow Boat to Purgatory, it was the driving force behind the disparate stories and characters that now populate the book.  Like Dore, who was so captivated by the inferno he chose it as the subject of his first compilation of illustrations, I found myself drawn to the enigmatic being who, oar in hand, was tasked with providing that proverbial last ride.
An immortal Templar knight named Gaspar De Rouse had been ghosting around the darker corners of my mind, and I'd written   snippets of phantasmal battle scenes between the immortal knight and all sorts of cuddly creatures and beings like hell hounds, fallen angels, and homicidal mortals. It was that picture of Charon, though, which gave rise to the mythology underlying the tale of Gaspar and set my creative juices free.
Inspiration, or as I like to call it conjuring, sometimes comes from the most unlikely places.
Perhaps this is as good a place as any to describe Slow Boat To Purgatory for those who haven’t read it yet.
Slow Boat, the first in a series introduces us to three men.
Gaspar De Rouse, a Templar Knight born in the mid 13th century. He is the epitome of the noble Templar, committed to God, the order and to the defense of the Holy Land. In 1291, at the battle for Acre, he is given the location of a priceless relic and tasked with protecting it. Before he can fulfill his mission he's murdered by another member of the Templar order trying to gain control of the relic. Enter an Archangel who resurrects him and, for a price, offers a chance at redemption.
Dominicus Bureau is a French priest who is a member of a modern day Templar order that still searches for the relic. He’s been on the trail of Gaspar and the relic for decades.  He carries a silenced .22 caliber pistol and uses it - often.
Alex Donovan, a retired navy seal, learns of Gaspar when his grandfather dies leaving him, not only a vast fortune, but an ancient book telling the story of the immortal knight. Alex is thrust into the midst of the ages old war, a war between good and evil, heaven and hell.
Slow Boat to Purgatory shifts back and forth between the times of the crusades, the sixteenth century, and the present, telling the stories of three men, and the collision of their individual fates. 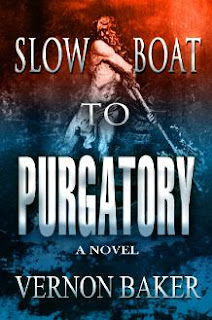 When asked to describe Slow Boat, I call it a paranormal thriller although it definitely crosses the lines of several genres so perhaps I need to come up with something like “paranormal-religious-escapist-horror-spirituality-treasure-hunting-thriller. One reader described it this way, “If Anne Rice and Dan Brown had a love child, Slow Boat would be the result”. I laughed but it makes sense.
Thanks again Christine and I look forward to hearing from your friends and readers.
Vernon Baker
Thank you, Vernon for a great guest post.  Don't forget to check out Vernon's Blog, Website and Slow Boat to Purhatory on Amazon.
Posted by C.G. Powell at 9:40 AM