Hollywood Stories: Short, Entertaining Anecdotes About the Stars and Legends of the Movies! 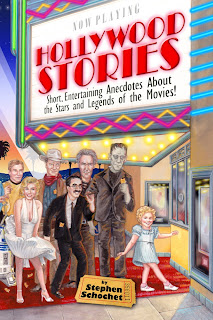 Genre: Film/History/Humour
Synopsis: At high noon on a cold November day in 1974, sixty-seven-year-old John Wayne faced off with the staff of the Harvard Lampoon on the famous campus in Cambridge, Massachusetts. The students had issued their challenge by calling the beloved American icon a fraud. Wayne, who had his new movie McQ to promote, responded by saying he would be happy to show his film in the pseudo-intellectual swamps of Harvard Square. After the screening, without writers, the former USC footballer delivered a classic performance. When one smart young man asked where he got his phony toupee, Wayne insisted the hair was real. It wasn't his, but it was real. The appreciative underclassmen loved him and after the Q and A session, they all sat down to dinner. Later Wayne, who was suffering greatly from both gout and the after effects of lung cancer (sadly the Duke only had five years to live), said that day at Harvard was the best time he ever had.
Just when you thought you've heard everything about Hollywood comes a totally original new book -- a special blend of biography, history and lore.
Hollywood Stories is packed with wild, wonderful short tales about famous stars, movies, directors and many others who have been a part of the world's most fascinating, unpredictable industry!
What makes the book unique is that the reader can go to any page and find a completely engaging and illuminating yarn. Sometimes people won't realize that they are reading about The Three Stooges or Popeye the Sailor until they come to the end of the story. The Midwest Book Review says Hollywood Stories is, "packed from cover to cover with fascinating tales."
Full of funny moments and twist endings, Hollywood Stories features an amazing, all-star cast of legendary characters and icons and will keep you totally entertained!
EXERPT
GREAT HOLLYWOOD COMEDIANS
by fans in each new town. At Union Station in Los Angeles, one of Jackie’s
entourage, named Billy the Midget, started selling helium balloons on the
platform. At one point, the little man was carrying so many products he actually
started to float away, when Jackie raced to his rescue and pulled him back to
safety. “Nobody gets to San Bernardino before I do, pal!”
Bill Murray Made it in the Shower
When he joined the cast of TV’s Saturday Night Live in 1977, Bill Murray was
getting hate mail till an idea struck him in the shower. The twenty-seven-yearold
comic, who replaced the very popular Chevy Chase, had struggled to be
funny in his initial weeks on SNL. Sometimes the volatile Murray angered the
show’s writers by blowing his lines; the best material went to Bill’s more
established castmates. But now, holding onto a gag gift, a microphone-shaped
bar of soap, the former medical student Murray had an inspiration. In the
season finale, Bill shone as a pretend tacky morning disc jockey that showered
with his wife, played by co-star Gilda Radner, while he talked to an imaginary
audience. The laughs were enhanced when Murray introduced his spouse’s
supposedly secret lover, Buck Henry, as a surprise guest who joined the married
couple under the running water. The “Shower Mike” sketch was a huge hit with
viewers; from then on Bill’s fan letters reflected a 180-degree change of heart.
Detective Burns
George Burns and Gracie Allen worried that their careers interfered with
their parenting. One night the married comics arrived home late and were
distressed to find that all the pictures had been cut out of their dictionary. Burns
insisted that he handle it; he asked his boy Ronnie where his daughter Sandy
had put the scissors; the kid didn’t know. When George asked Sandy the same
question, she revealed her brother hid them in a drawer. Even Gracie was
impressed by George’s detective work, and the kind-hearted straight man was
so pleased that he doled out only a minor punishment to his son. For many
years afterward, George proudly related the tale about his clever sleuthing to
dinner guests until one night the now grown-up Sandy couldn’t take it anymore.
“Please don’t tell the scissors story tonight, Dad.”
“Why not, sweetheart?”
“Well, the reason I knew where they were is that I was the one who cut out
the pictures.”
·         Book Trailer: http://youtu.be/tRGGeaVWSzc
Website http://www.hollywoodstories.com
Facebook http://www.facebook.com/profile.php?id=1450539098
Twitter https://twitter.com/#!/htales
Goodreads http://www.goodreads.com/author/show/771835.Stephen_Schochet
Posted by C.G. Powell at 8:48 AM